By now, everyone has heard about the “Imperial College report on COVID-19”, which apparently was the reason for the 180-degree shift in the trump administration’s response and call for preparedness to the COVID-19 pandemic. A few days ago, trump was claiming that this is a minor bump and the virus will miraculously go away soon; on Monday, something seemed to have put the fear of God in the White House; a national emergency was declared and trump was talking about social distancing and washing hands. In the UK, the crazy idea of letting everyone get infected to achieve “herd immunity” has been replaced by proclamations of mitigation and suppression.

The change in strategy has followed the publication on Monday of a UK government-commissioned report from Imperial College London’s COVID-19 Response Team, which models different strategies and outcomes, for the UK and the US. An early copy of the report was shared with the White House over the weekend.

Here, we present a summary of the report.

The authors of the study consider 3 scenarios (and sub-scenarios) and use simulations to predict fatalities in each scenario.

Note that in all cases, the elderly and those with pre-existing conditions will experience a higher fatality rate.

The authors claim that scenario #3 is the only viable option at this time (assuming there are no vaccines or drugs that can significantly slow down the virus).

Paradoxically, while #3 is implemented, people and politicians will feel that the steps are overkill since the death rate will be so low.

In this scenario, some mitigation steps are taken for a period of 3 months, that help to “flatten the curve”.

In this scenario, the first 3 interventions in the table below are implemented. The last 2 are used in scenario 3.

Note that mitigation steps reduce R0 but not to below 1.

With all mitigation and suppression steps in place, ICU demand (orange line) stays below supply during the 5 month period. Total deaths are in the 1000s.

Note that suppression+mitigation steps reduce R0 to below 1.

But after the 5 month periods, when restrictions are lifted (we cannot go on like this forever), the lines start to rise.

So, the authors advise, that scenario #3 needs to be replayed periodically every few months for about 18 months until everyone gets vaccinated. The graph below shows one such 18 month scenario (for GB not USA), where certain mitigation steps are implemented all the time but some of the suppression steps are lifted when ICU cases per week fall below a threshold (50) and are brought back when they exceed another higher threshold (100).

The simulation uses inputs such as ICU occupancy rate of infected people, death rates by age groups measured so far and estimates of the spread parameter R0 and how it changes as mitigation and suppression steps are deployed.

The study does not take into account any new or repurposed treatments and drugs that might reduce fatalities, although the measured mortality rates account for the effect of some of the drugs that have been tried out.

The study does not assume any reduction in infection rates with summer temperatures.

The study focused on UK and USA only. Forecasts for developing countries is a question mark.

The study only hints at steps countries must take to beef up healthcare facilities and equipment.

During those 18 months, things are going to be very difficult and very scary. Our economy and society will be disrupted in profound ways. And if suppression actually works, it will feel like we’re doing all this for nothing, because infection and death rates will remain low.

It’s easy to get people to come together in common sacrifice in the middle of a war. It’s very hard to get them to do so in a pandemic that looks invisible precisely because suppression methods are working. But that’s exactly what we’re going to have to do. /end

6,646 people are talking about this

The authors of the study end with these somber words —

We therefore conclude that epidemic suppression is the only viable strategy at the current time. The social and economic effects of the measures which are needed to achieve this policy goal will be profound. Many countries have adopted such measures already, but even those countries at an earlier stage of their epidemic (such as the UK) will need to do so imminently.

However, we emphasise that it is not at all certain that suppression will succeed long term; no public health intervention with such disruptive effects on society has been previously attempted for such a long duration of time. How populations and societies will respond remains unclear.

The leader of the study team, epidemiology professor Neil Ferguson, himself seems to have caught the virus,

Sigh. Developed a slight dry but persistent cough yesterday and self isolated even though I felt fine. Then developed high fever at 4am today. There is a lot of COVID-19 in Westminster.

5,041 people are talking about this

Note that not everyone agrees with scenario #3. Others think that something like scenario #2 with aggressive testing and contact tracing will get the job done with less disruption to life. They point to S. Korea as an example of this approach.

* @POTUS has even less power than states on domestic PH. Trump has > power in banning int’l travel, but not to order a lockdown w/in a state. Nor does he have clear power to ban domestic travel. No modern precedent for that. @CDC could/should advise against domestic travel.

Beyond const’l power to impose mass lockdown, how could it be enforced? American values are opposed to draconian social control/intrusive surveillance. We must encourage #SocialDistance & provide safety net. But must think carefully before exercising sweeping compulsory powers 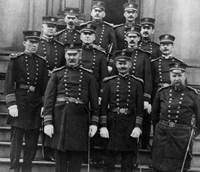 Prof. Bedford (like many others) proposes testing and isolation (similar to S. Korea) as the strategy, rather than aggressive suppression –

Managing this level of social distancing required for suppression while still having a functional economy and society would be difficult and it’s not at all clear that this could be maintained for the ~18 months until we have a vaccine. 6/19

108 people are talking about this

Here is some selected text from the twitter chain —

I am sure I have oversimplified the report and the thoroughly detailed report contains much more subtle analysis and messages. Feel free to add your insights to the comments section.

You may differ with the study’s projections, conclusions and its recommendations for action. We can nitpick about the various factors that were not taken into account in the simulations. We can argue that scenario #3 is impractical in this country. But people are taking this report seriously, including some in the trump administration, although the administration have not yet taken any major responsible steps yet. The study itself is quite comprehensive and is based on the best data we have available.

Adding more testing kits, ICU beds, healthcare staff, etc. will help but it will get overrun until we use suppression techniques to bring R0 to below 1.

Countries like China, S. Korea, Italy, France and Spain are already past implementing mitigation steps and are close to deploying the suppression recommendations. I would presume that we are headed in that direction as well, so we may as well prepare for it physically and mentally.

Granted, trump and the GOP will take steps reluctantly, use the occasion to demonize Democrats, China, immigrants and all his “enemies”, spend trillions of tax and borrowed dollars to shore up businesses and their rich buddies, take credit for every little improvement of the situation and blame Democrats for any bad news. How this will play out politically, how elections will be effected, will Democracy survive — these are questions that will be discussed across the punditry class over the next few months, writing and talking from the confinements of their homes. We need to prepare for that too.

If implemented, scenario #3 will be unlike anything the world has seen. The effects on the world economy and people’s lives has not been calculated yet. Let’s get prepared for scenario #3, even though we all harbor hopes that #2 will get the job done.

Source: AKALib – “The Imperial College Report paints a dire picture of the future and What we must do” – Daily Kos – Wednesday March 18, 2020